The Scoop - The Blog For Kids World

As a young boy, Jadav "Molai" Payeng witnessed the disastrous impact of the rainy season in India.
He was distressed by how many animals were losing their homes, and so he built them a new forest.
This true story about a man who dedicated his life to expanding the forest area near his home and keeping
the animal population alive makes an absolutely gorgeous picture book with a message of dedication and
strength for young people ages 4-8. The stunning art of Kayla Harren really brings this Indian forest to life.

Find The Boy Who Grew a Forest in the Library

You are so angry! What will you do?
“You can’t sting the cat!” Shouts the narrator - A swarm of angry bees have taken over the town creating chaos everywhere they go as they follow a little boy who looks just like them.  But why does the little boy have a wagon full of tomatoes? Splat! In Lemony Snicket’s latest picture book, we learn that anger is an emotion we should not let take over. But the damage has been done to this peaceful town. Who will the bees try to stink next?
Anger is an emotion all young readers have to learn to live with and find ways to overcome it.  I love how Snicket tackles the subject with simple yet a powerful story that ends in love and comfort. The illustrator Rilla Alexander helps the story flow with primary colors done in a rubber stamp, ink and collage format allowing everything to come to life. If you enjoy Eric Carle’s The Grouchy Ladybug or David Shannon’s No David!, then you will connect with Swarm of Bees.  Ages 4-8.
Find Swarm of Bees in the Library
Jorge, Kids World

This wordless picture book follows Molly as she wrestles with her anxieties - physically respresented
by a shadowy monster that follows her everywhere. She can't seem to say or do the right thing with her
peers and is constantly aware of this shadowy presence. She stands up to the endless harrassment of her
negative emotions and bravely faces her fears. A lovely book to help kids be brave and stand up for
themselves... even against themselves. For children ages 4-8.

Find Brave Molly in the Library

“I was a nervous kid. Self-conscious. Shy. Quiet… Most of the time.”

In this highly anticipated graphic novel, Raina is experiencing a lot of stress from multiple fronts. Her anxiety changes the way she perceives every day moments: eating, using the school restroom, spending time with friends, etc. Unfortunately, her anxiousness comes with physical symptoms such as IBS, which exacerbates the stress of getting through the school day- if she even is able to attend school. Slowly, Raina regains control of her runaway thoughts and emotional spikes with the assistance of a therapist.

Bullying behavior at school is on display here, and the fear of being targeted is very poignant. Though the bully plot is perhaps a bit too neatly wrapped up by the end, the concept of coping with anxiety and not curing anxiety is deftly handled.

Fans of Telgemeier’s Smile and Sisters will find a lot to enjoy here. Those in upper elementary school who appreciated the social constructs of Palacio’s Wonder and Hunt’s Fish in a Tree may also find this graphic novel worth a read.

Find Guts in the Library

“Occasionally Sweety did things that others had a hard time comprehending. Like the day she gave her book report through interpretive dance.”

Have you ever danced to the beat of your own drum? Have hobbies that some may find weird or just different?

Sweety is an awkward mole rat. She likes to interpretive dance, look for various fungi, and read all sorts of books. But she doesn’t have many friends. Not a lot of the other mole rats like to look at fungi, you see. And they don’t quite understand the meaning of interpretive dance.

But after her beloved and equally awkward Aunt Ruth comes to visit, Sweety realizes that she doesn’t have to change who she is to have friends. Just be who you are and the friends will find you.

It’s a perfect book for preschool to lower elementary readers who need a boost of self-confidence (or to look at cute naked mole rats!)

Find Sweety in the Library

There’s plenty of heartbreak involved in any sanctuary’s story, but there’s also good news. People who help animals are everywhere.

So many books tell you about your new puppy. How to pick the perfect pup, how to train it, and how to care for it while it grows…but what about when your loyal dog get older and have a grey ‘sugar face’? Join Mino, Jack, and Buffy, three senior dogs that take you on a tour of Senior Dog Sanctuary of Maryland. Meet their friends, hear their true stories of rescue, and learn how you can help!

Sweet Senior Pups is a book about love, healing, and helping. So many senior dogs need help are ready for loving homes. This book teaches us all how to care for them from ‘sugar face’ tip to waggly happy tail. Learn how to adopt them, make them special treats, how to play new games and generally helping them enjoy their life until they get to that ‘rainbow bridge’ in the sky. Sweet Senior pups is a must read for any dog owner, and a good basis for children of all ages to be completely educated about the complete responsibility of caring for their furry family member from beginning to end.

"They say that there are animals that will chew off their own leg to get out of a trap. I never understood that...until now."

Jordan Banks is in the 7th grade and loves drawing cartoons about his life. But rather than attending art school, his parents are sending him to a fancy private school renowned for its academics. As one of the few students of color, he soon finds himself lost between his neighborhood life in Washington Heights and his new upscale life at Riverdale Academy Day School.

Author & Illustrator Jerry Craft’s funny illustrations deftly contrast with the novel’s more sobering themes of bullying, income inequality and microagressions. New Kid always maintains its sense of humor which is what makes it the perfect graphic novel for kids ages 10-14.

Kids who like authors Raina Telgemeier or Jason Reynolds will love New Kid. It’s also a great read-a-like for other graphic novels such as Cardboard Kingdom by Chad Sells or Real Friends by Shannon Hale.

Find New Kid in the Library. 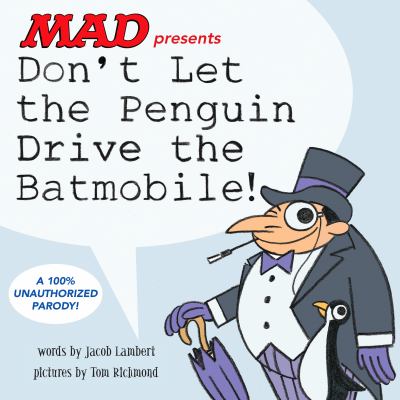 “I WANT TO DRIVE THE BATMOBILE!!!”
The arch villain Penguin really wants to drive the Batmobile, but the readers of this book have been entrusted by the Caped Crusader himself to make sure that doesn’t happen. Special pop-ins of various characters (good guys and villains alike) from the Batman universe encourage the reader to stand firm.
Like Don’t Let the Pigeon Drive the Bus by Mo Willems, this MAD parody invites readers to interact with the book’s text by going off script and shouting “No!” at the pages. In particular, young superhero fans and Pigeon fans ranging from 2 years old to early elementary schoolers will find a lot here to enjoy especially if their adult reader puts some “whine” into Penguin’s pleading. Go ahead, grab a reading partner, and remember, Batman is counting on you to not let Penguin drive the Batmobile.
Find Don’t Let the Penguin Drive the Batmobile in the Library
Find Don’t Let the Pigeon Drive the Bus in the Library
Celeste, Kids World

After keeping the jungles of Chult safe the heroes used the treasure they earned to open up a Bed and Breakfast called the D&D B&B. Wanting to expand their business empire they set their eyes on the city of Water Deep to open up a 2nd location. News quickly spread and soon the adventures were thrown into a new treasure hunt. Someone named Volo left a mysterious note with clues leading to riches and dangers.

After some negotiation the team decided how to build the Bed and Breakfast. No frills or fanciness was added however they spared no expense when it came to security. After several bank loans the bed and breakfast hired a S.W.A.T team to keep the building safe while they went on adventures.

Being new to Water Deep the locals wanted to say hello to the D&D B&B crew.  The criminals in Xanathar’s gang first stopped by after hearing there was lots of gold soon to be found. They offered the heroes help to find the treasure if they split it 50/50 with them. If they refused something “bad” might happen to their Bed and Breakfast.  The city guard stopped by later and offered a similar deal. The city guard warned the team that some surprise bills might come their way if they don’t share the treasure.

After weighing both options the Bed and Breakfast team originally decided to team up with the city guard. However after sneaking into the Xanathar’s underground hideout they made friends with some of the goblins. They even proved how strong they are to Xanathar by taking out his body guards. Now the heroes are teamed up with both sides without the other knowing.

Volo’s letter is leading them to somewhere with spiders next. Hopefully the team can keep themselves and the Bed and Breakfast safe.

Pen and Paper Tabletop Adventure Club is a group of interactive game players composed of kids ranging from 5th to 8th grade. The group will next meet Saturday, January 19th at 2pm. Registration is required to play.

“What do you want with all these toys? After all…everyone in the whole Chasma knows Neon Knights can’t catalyze.”
Beryl is a Neon Knight living on Chasma Ring 7, and it’s not easy being one. Looked down on being different for not having the same abilities as the other Knights in the Chasma, Beryl tries to keep to herself and occupy her time in her secret workshop. One day her path crosses with Coro, an Oxygen Knight who just happens to be one of the strongest of the Knights in the Chasma. Together with imagination and invention, both their worlds will change.
Lots of lessons to be learned here. From friendship, persistence, recycling, and being true to yourself, Chasma Knights is a quick but impactful read for Grades 1-3. Gentle but insightful, Beryl is a good role model for all readers, especially for young girls interested in STEM activities.
Find Chasma Knights in the Library
Naomi, Kids World

Haiku for You Chalked in Front of the Library